A survey of the financial state of the states by Truth in Accounting has found that the State of Illinois ranks 49th in the country for taxpayer burden.

Here is the story as reported by the DuPage Policy Journal:

DuPage County Board member Tonia Khouri said a one-party control or not tax burden is tearing up the state.

The 49th House District candidate seeking to replace state Rep. Mike Fortner (R-West Chicago), who is retiring, responded to a recent Truth in Accounting survey that ranked Illinois 49th in the country for tax burden.

“Regardless of which party is in control, having one party control for an extended period of time is never good for the taxpayer,” Khouri told the DuPage Policy Journal, of the ranking that comes after several years of single-party control by the Illinois Democratic Party.

With a graph to back up the facts, researchers from the nonprofit organization survey resolved the average Illinois taxpayer owes $50,400 based on 2016 government financial records and has not nearly enough resources available to cover its estimated $235.9 billion in liabilities.

“Illinois citizens should be outraged with the fact that Illinois is ranked 49th in taxpayer burden and every person (including our children) is $50,400 in debt by no fault of their own, Khouri said. “This problem is the result of Democratic majorities over the last 15 years putting policies in place that overspend, overtax, and ignore our unfunded liabilities.”

The wife and mother said the ranking is no surprise.

“Illinois is ranked so poorly because we have $235.9 billion in total liabilities, but only $25.5 billion in assets,” Khouri said. “Not to mention nearly half of the state’s debt is owed to pension liabilities which grew more than $8 billion in 2016 to $116.8 billion.”

The candidate said Illinois needs to start talking about its unfunded pension liability again and find real, workable solutions to the pension crisis.

“The taxpayer burden ranking is important to me because it shows once again how politicians in Springfield are bankrupting our state and hurting our families,” Khouri said. How could any good parent be okay with leaving their child a bill of $50,400? There’s right and there’s wrong and it’s wrong for politicians in Springfield to continue to kick the can down the road when it comes to solving our biggest problems in Illinois.”

Given the chance, she will make difference, she said.

“I’m going down to Springfield to tackle the big problems and work with others to find real solutions,” Khouri said. “Our children deserve it.”

This story originally appeared in DuPage Policy Journal on December 5, 2017, and was written by W.J. Kennedy.

During Tonia Khouri’s tenure on the DuPage County Board, the county has cut its budget by $36.5 million and saved taxpayers an estimated $110M through shared services, joint procurement, and consolidation.

“I’m going to Springfield to defend our homes, represent the people’s interests and stop the raising of property taxes.” 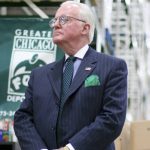