The Republican State Leadership Committee (RSLC) has named Tonia Khouri one of its featured candidates in their “18 Races To Watch in ’18” list.

The “18 in ’18: Races to Watch” list was released in coordination with the RSLC’s Right Women, Right Now (RWRN) and Future Majority Project (FMP) initiatives which aim to recruit, identify, and support female and diverse Republican candidates at the state level.

The “18 in ’18” list includes new and targeted candidates on the ballot this November, as well as, Republican elected officials who have already achieved electoral success and are in competitive re-election bids. 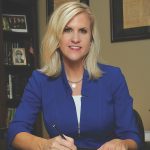 The RSLC has named Tonia Khouri to the “18 in ’18: Races to Watch” list because Khouri “will be a great asset to the House of Representatives in Springfield” because of her experience on the DuPage County Board and a business owner. “She knows how business works and how to balance a budget.”

“Since 2011, the FMP and RWRN initiatives have proved tremendously successful in building up the next generation of Republican state leaders. Together, these programs have helped to elect over 100 new candidates from diverse backgrounds and over 500 new women to so state-level offices.” 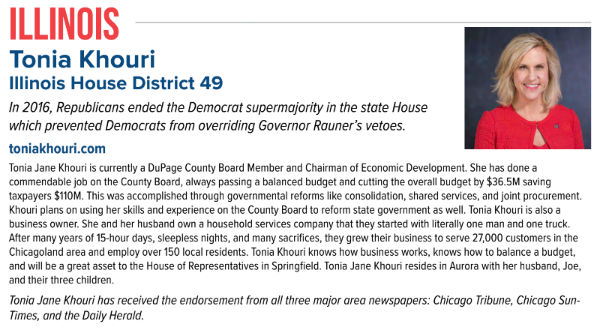 “This round of candidates identified on our list embody the future leaders we will wholeheartedly support through FMP and RWRN initiatives.” 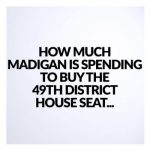 We Are Taxed Out – Tonia Khouri Is On the Side of Taxpayers (VIDEO)Election, Property Taxes, Taxes, Video