Tonia Khouri appeared as a guest on Illinois Rising Radio on AM 560 with Dan Proft and Patrick Hughes to talk about Mike Madigan working to expand his influence into DuPage County, negative mailers, and how a vote for Katrina Villa is a vote for Mike Madigan’s agenda and the status quo in Illinois.

How Madigan’s Money Lies To Voters 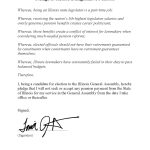