Tonia Khouri has been endorsed by the Daily Herald Editorial Board for Illinois House District 49 State Representative.

Here is the endorsement which appeared in the Daily Herald: 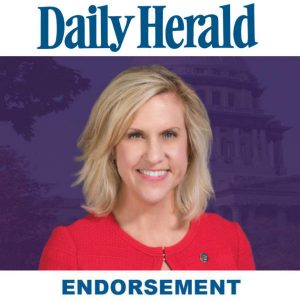 The contrast between the two candidates’ positions could hardly be sharper.

Khouri, a DuPage County Board member and co-owner of a successful household services company, is likewise smart and well-versed in Illinois issues, with passion for curbing spending, property tax reform and Illinois’ pension crisis. She is somewhat more conservative on social issues than we, but she suggests an openness to collaboration in solving problems.

The House can use her temperament and sense of urgency.

This endorsement originally appeared in The Daily Herald on October 11, 2018