Tonia Khouri has been standing with other reform-minded legislators and candidates calling for a change in Springfield’s toxic culture.

They have challenged Illinois Democrats to stand on the side of victims of sexual harassment and call for House Speaker Michael Madigan’s resignation.

This story has been covered by many media outlets, including the following original story as reported by DuPage Policy Journal: 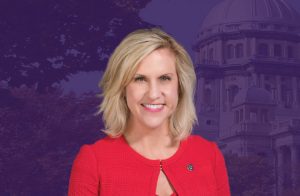 State House candidate Tonia Khouri wants House Speaker Mike Madigan (D-Chicago) to put himself in the shoes of all the victims who have made accusations of sexual harassment at the hands of at least four of his closest associates since the #MeToo movement hit Springfield just four months ago.

“What if Sherri Garrett was your wife or your mother?” she asked during a recent press conference where she joined other female Republican lawmakers in calling for Madigan’s ouster. “What if Kelly Cassidy was your sister or your friend, or Alaina Hampton your daughter? Then would you stand up and speak out?”

Garrett recently accused Tim Mapes, Madigan’s now former longtime chief of staff, of harassment. While Kevin Quinn, a former Madigan aide, has been accused of similar behavior by Hampton, and Rep. Cassidy has claimed that she was forced to resign from her part-time job in the sheriff’s office for publicly questioning Madigan’s handling of the accusations.

“I will always stand up and speak out when I see something wrong,” Khouri, who is running against Democrat Katrina Villa to replace Rep. Mike Fortner (R-West Chicago) in the 49th House District, said on her website. “That’s how I originally got into politics, and that’s the kind of state representative I will be for the people in the 49th District. I recently joined other reform-minded legislators and candidates calling for a change in Springfield’s toxic culture.”

In the end, Khouri said voters have to be willing to step up and demand the kind of government they deserve.

“It’s time we start holding elected officials accountable for their actions or, frankly, their inaction,” she added. “The best way to change the culture in Springfield? Change the people in Springfield.”

This story originally appeared in DuPage Policy Journal on June 16, 2018, and was written by Glenn Minnis 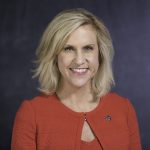 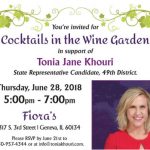 Cocktails in the Wine Garden at Fiora’s On June 28Events, Illinois, News